The Zoho Reports team helped me out with a tricky report to show the lead to won potential conversion rate. To explain the report, let's consider this scenario:
1. The business had 1000 leads entered into the CRM through telemarketing
2. Salespeople then qualified those leads and converted 50 of them to opportunities
3. The sales team then closed 10 of those leads

Based on those stats, we'd expect the lead to won potential win rate to be 1% (10/1000). In the default Zoho Reports conversion stats, you can only see potential to closed potential conversion rates. This stat is misleadingly high (10/50 = 20%) because it's only considering converted leads and ignoring junk/lost leads.

If the sales team really closed 20% of cold leads, you would probably see them usurping Brian Tracy on the speaking circuit. In reality, they're decent (1% conversion) but not world beating. I don't know about you, but I prefer to deal with reality.

1. Set up a new query table using this query:

2.  Set up a new report based on that table 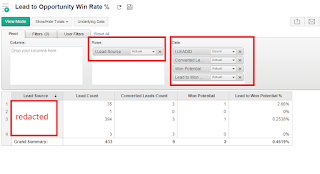